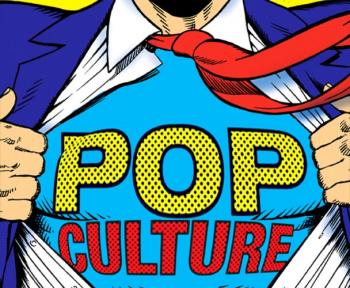 This course will examine the impact of Pop Culture in the United States that help make up our unique American culture.  Students will analyze and predict how society effects pop culture and the way that pop culture impacts society.  Each unit will include a brief overview of the significant historical developments of the time period.  We will then examine the popular cultural developments that coincided with the historical events.  Mass Media, music, literature, film, radio, tv, sports, fashion and advertising will be some of the focus areas for study. This class will give an opportunity for students investigate variety of different pop culture influences that have become part of the American identity.

-Gain an understanding of the relationship of American society and Pop Culture.

-Gain exposure to an assortment of film genres.

-Study in depth a particular type of file genre.

It is the goal of this class to let students have the chance to expose the popular aspects of these different influences that they would not normally have the opportunity to experience.

Tests will be given at the end of most units and will make up a great portion of the overall class grade that you will earn over the course of the class.  If you miss the date of a test, the makeup test will differ from standard test.  *

There will be opportunities throughout the year to work on special projects that will enable you to create a variety of papers, presentations and artwork.  Handouts at the beginning of the project will explain goals and point values of projects.  Group work will be graded both on group level and individual level.  *

There will from time to time be small quizzes to check understanding of reading assignment, class discussions or other materials.

It will prove very critical to keep up on homework as the year progresses.  Unless otherwise instructed, homework assignments are due the following day at the beginning of the class period.

Late work will be accepted only once per Semester.  This free HOMEWORK PASS allows you to turn in the assignment late and get credit.  Must be completed before unit test or 2 weeks, whichever comes first.  Students who are absent, for whatever reason, are responsible to get assignment when they return to school.

It is expected that everyone will make a serious effort to participate appropriately in class and group discussions.

* Projects or tests that students are aware of ahead of time will be due the day they return from absences.  If a review was missed, student will take test upon returning unless new material was introduced.

Be respectful of one another

No food or drink allowed in class other than water bottles.

Head must be self supported at all times.

No backpacks/purses etc. on desk  NO EARBUDS/HEADPHONES

Tardies and bathroom passes:        You are allowed one tardy without detention being given.  Bathroom passes count as tardies and phones are required to be given to me as a pass.

*** NO ELECTRONIC DEVICES unless I have given special permission.  (30 minutes and I will take the device and turn in to office.)***

The course will be organized somewhat chronologically through 20th century. After a brief introductory lesson in basic sociological concepts, the class will start looking at the society of the early 20th century.  Each time period unit will focus on the major pop culture impact and changes that were occurring.  Students will be responsible to reflect and analyze the various aspects of pop culture as different examples are made available in class.  Students will also spend time in both individual and group projects investigating further the aspects of pop culture that they have interests in.

Goal:  This unit will establish a basic foundation of cultural terms and perspective to work from for the remainder of the course.

Goal:   Student will become familiar with the pop culture from the very late 1800s to 1920 and study an example from this era.

Goal:   Students will examine the rapid changes that started to take place in pop culture due to the introduction of talking movies, radio and phonographs.  Students will also explore the changes in society sparked by the end of World War I, the post war prosperity and the prohibition era.

Goals:  Continue to study pop culture and its connection with the rest of society, specifically how the depression influenced the entertainment of the decade.

Goals:  A variety of assignments will examine different strains of pop culture from World War II through the Golden age of Hollywood.

Goals:  Assignments will examine the impact of the Vietnam War and the 1960’s on American culture.  The unit will also analyze the strong counter-culture that emerged out

of the time period.

Goals:  The unit will be a brief overview of the most recent developments and present the challenge of predicting the next steps and developments that will occur.